Even though the year already started a few weeks ago, I wanted to take a few minutes to offer you my best wishes as well as a retrospective of the latest developments of 2019.

Fall of 2019 was politically charged and very busy for me.  Unfortunately, the 15-week issue was not a priority of the last election campaign.  However, many politicians and leaders have help to keep it alive and integrated it in their campaign and election promises, which is to their credit.

The NDP, despite the challenging environment, has continued to provide unwavering support for the 50 desired weeks over the last 11 years and will continue to do so.  The Bloc Québécois also put this issue forward after strongly supporting me in the early years of the petition, opening the parliamentary session with this most important issue as promised during the election campaign.   Unfortunately, the Conservatives were more cautious this time, despite their strong support at the St-Hyacinthe congress.  However, several Quebec MPs continued to carry the torch and I thank them for that.

As for the Liberals, they offered us a rather unexpected U-turn by inserting a amendment proposal to 26 weeks at the end of the election campaign.  The question that everyone was asking: but why suggest this insufficient measure when the budget director has been given the cost of a 50-week amendment?  It should be remembered that this study confirmed the feasibility of this project and that the previous 7 bills, supported by studies and statistics, all called for an amendment to 50 or 52 weeks.

When Mr. Yves-François Blanchet opened the parliamentary session by asking our Prime Minister, however, we were pleasantly surprised by his opening to meet with us the same day to discuss it in a more thoroughly.   It was clear from that meeting that the 26-week amendment was clearly insufficient and that all had to look at it again.

Having multiplied the media opportunities following this meeting, you can find all the details and interviews that Emilie Sansfaçon and I offered to the media, on the FB page of the campaign, to cover this beautiful historical progress of the file.

I wasn’t born yesterday as you know.  Over the past 10 years, politicians have shown many ups and downs by their inaction and inconsistency that followed the beautiful words and promises.  However, I think it is important to recognize that this is a step forward and that it is the first time that a Prime Minister has been personally involved in the discussions with openness.  I also want to point out the involvement of the new Minister, Carla Qualtrough, who, despite her very recent arrival, was already familiar with the issue and also spoke French very well. Mr. Pablo Rodriguez has also become an important player in the case and I thank him for his reliability and availability.

There is a historical momentum here.  However, it will be short-lived given the minority status of this government.

What will be done in the coming weeks in this pre-budget period?  This is where the important rest of this issue will be played out and I will come back to it very soon.

In the meantime, I would also like to take this opportunity to thank you for your unwavering support.  Whether you’ve been with me since day one or recently, your support is important.  Without you, I would never have been able to carry this project to where it is today.  Behind every signature you collect, every letter you send, you’re there.  Success is the repeated form of small efforts, repeated day after day.  We must continue to carry this project until it finally sees the light of day.  The foundations of this project are solid, as is my determination and just as I hope yours will remain.

For all of us, I hope that 2020 will be a year of realization and change and a better future for all sick people.

May 2020 be a year of happiness, prosperity, peace and, above all, health for you and your loved ones! 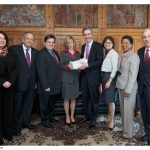 Tabling of the first parliamentary re-opening Bill 20011-2012 !Uncategorized
15 WEEKS AND 2022, WHERE ARE WE REALLY?Uncategorized